On The Inimitable Spirit of Life

Home » Exhibition » On The Inimitable Spirit of Life

"On the Inimitable Spirit of Life"

An exhibition of paintings by Nayanaa Kanodia

Set in an opulent backdrop, a luscious fruit bowl lays beside an open notebook, and an unlit lantern that sits aloof in a deep green bed of grass seems to tell a story of its own. Such possessions, however disparate they might seem to be, make us feel more at peace with our identity. Kanodia welcomes the viewer to the warm ambiance of the world she portrays, often through rudimentary yet luxurious elements. There is a sheer contrast between the images she uses in the backdrop of her composition with images of Hindu deities to nudes by Souza, for instance.

No longer oppressed as she used to be, her woman, self-assured and liberated, is usually portrayed with a mirror in hand or caught in their personal moments where she is taking time to adorn herself, lost in her own sense of reality but breaks this fourth wall by sanguinely looking out to meet the gaze of the viewer with poise.

Her visuals provide a frame through which you peep into these painted snapshots of ordinary people with a myriad of fantastical elements like the creatures of wildlife propping up in compositions like a flamingo at the foot of the couch, a zebra peeping in through the window, monkey eating a banana crouched behind a woman. This synthesis of reality with fantasy, of lush green with a synthetically crafted interior, is meshed in a dreamlike nuance. It may be perceived as an ironic juxtaposition of what the balance of ecology has become today or the sheer vibrancy of the composition as a whole clasp on to a utopian vision that cradles a sense of harmony amongst the living.

Through this exhibit, Kanodia is examining various angles of a single prism. At first glance, you see a portrayal of a quaint scene but upon further examination, an integrated multilayered expression is revealed as the artist believes that one can only grasp the complexity and nuance of the vision she holds, only after abandoning typical notions and then keenly observing the relationships and components at play.

On lyrical notes drawn from her observations, romantic portrayal of the scenes from daily life opens up to the Mumbai street in Monsoon embellished with people with their bright umbrellas to a barber engaged in his work in a pleasant corner amidst the greens, spiritedly chatting with his customer and a welcoming couple in a warm embrace of conversation and laughter. In these renderings, Kanodia infuses an incandescent spirit in little moments from life such as these, which may go unnoticed at times.

Describing her work, Nayanaa says: My paintings delight the viewer with their whimsy yet contain the most important social messages of our life. We  have been invaded by western culture but at the same time we retain our roots and identities. Each depiction is charged with innocuous humour personifying the subtle ironies that permeate daily life which lie in harmony and yet in conflict with the collision of East and West. My paintings are infused with deceptive simplicity, mirthful lyricism and a spirit of authenticity. Together they collalist to form an insightful documentation of a visual timeline of the thought precisely to the limbs of everyday occurrences, objects and people.

Kanodia plays with satirical tones that bring out the hypocritical beliefs our society seems to hold when it comes to modern values in a light-hearted fashion. She makes an unforgettable social commentary on how we behave,  perceive, and occupy space. The world is so true, naked, and ludicrous that we catch our breath as we recognize it. 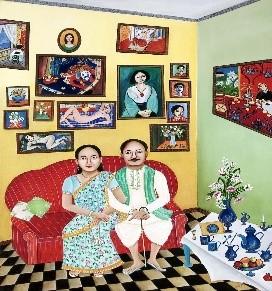 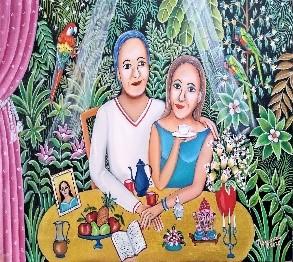 Away with Our Blues 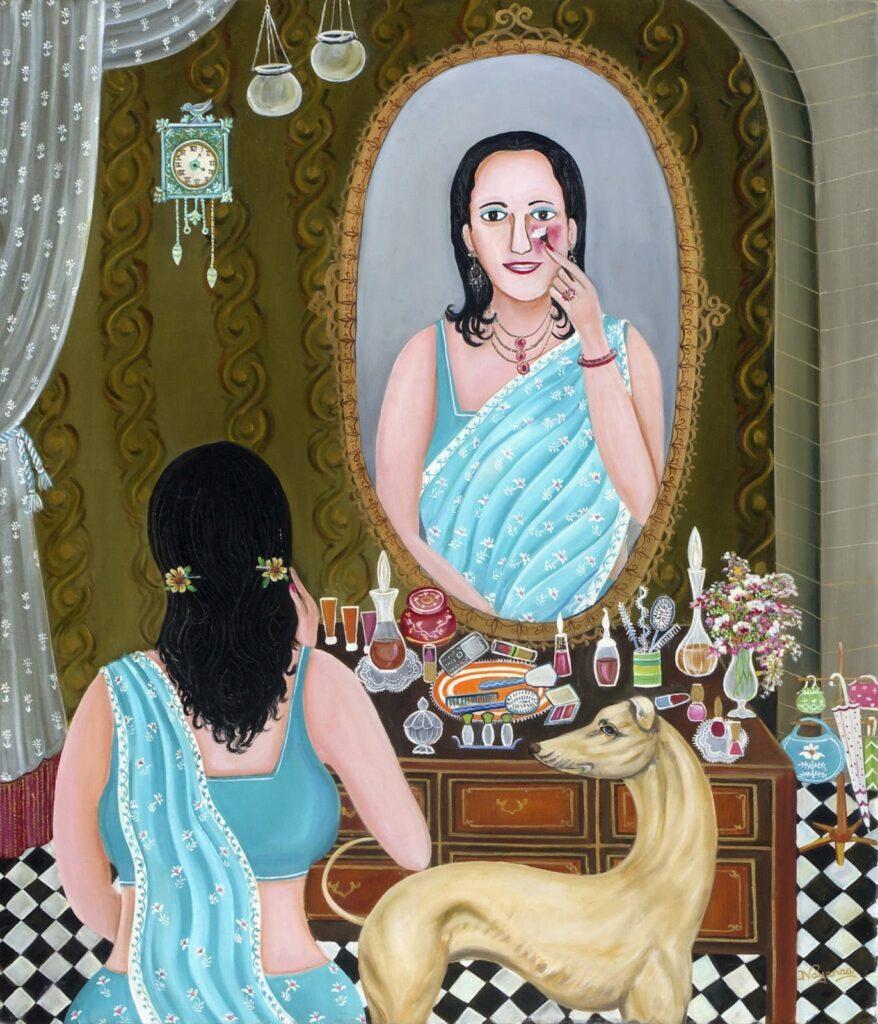 Beauty at its Best 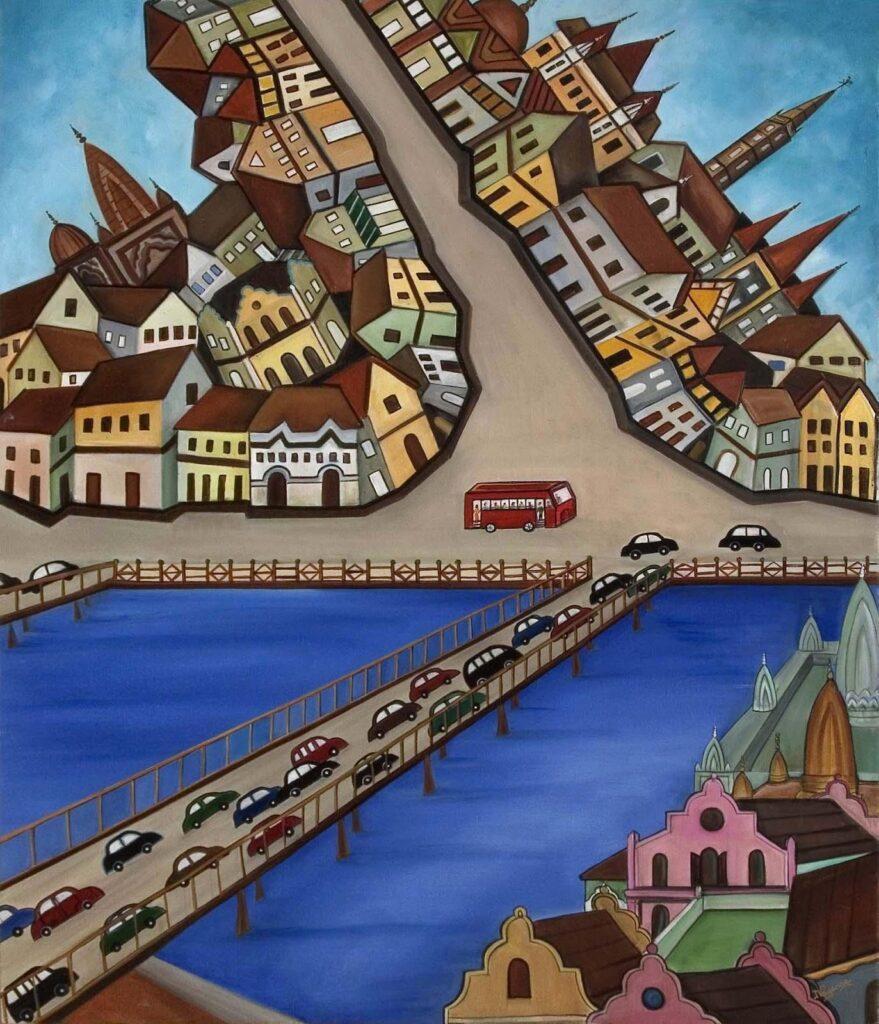 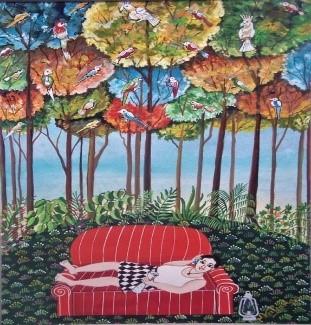 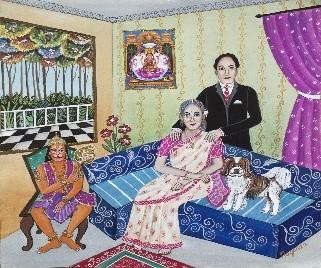 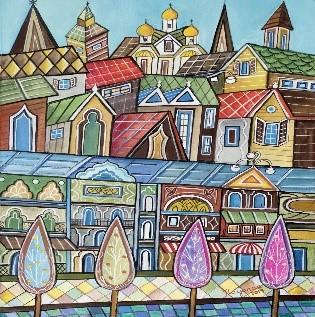 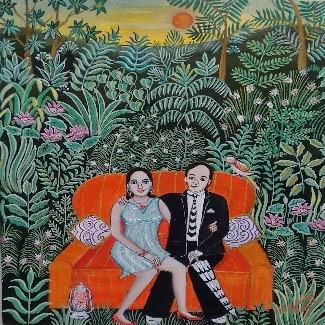 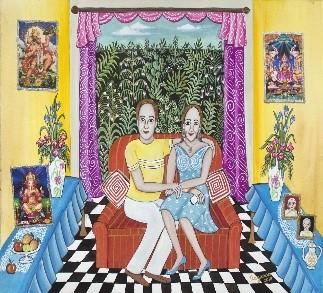 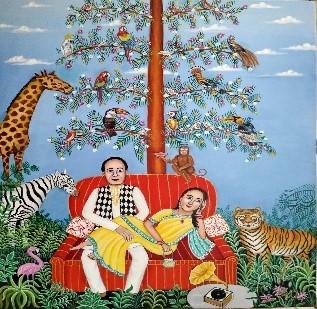 Our Tree Of Life 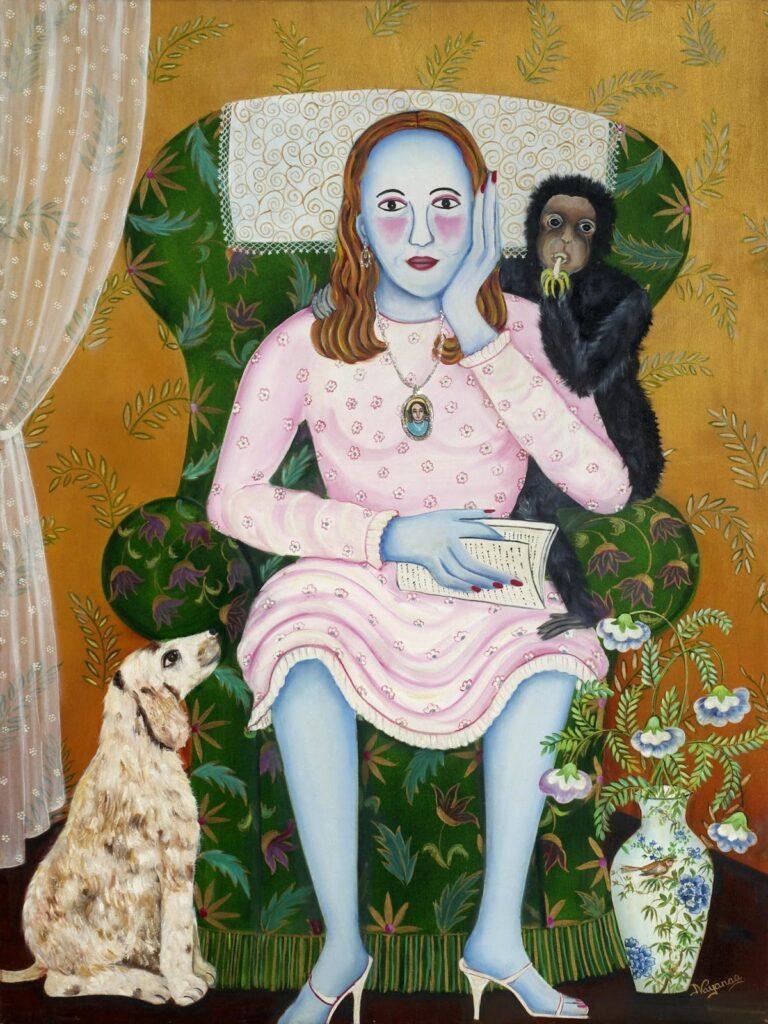